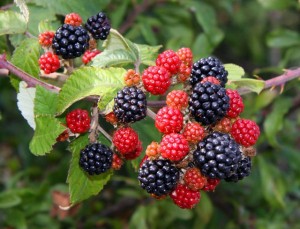 The blackberry has long gotten a bad rap, and not just by frustrated gardeners seeking to eradicate the stuff. “Bramble” itself means “envy” in folklore. Blackberries typically denote remorse when used as metaphors in fiction. And just as in fiction—Aesop’s version, at least—the best berries inevitably hang at the farthest reach or are hidden beneath a canopy of spiny leaves that tear savagely at the wrist and fingers grasping for them.

As it grows, the long thorny canes of the blackberry loop according to their own logic and weight. English peasants of past centuries believed that a child’s hernia rupture could be cured by repeatedly passing the child through one of the cane’s loops. The Celts loathed the blackberry as a symbol of evil, though they were easily persuaded to drink the fruit as wine. Britons considered it to be “fairy fruit,” and therefore forbidden, while Christian folklore characterizes the ripe berry’s color to be symbolic of Christ’s blood and the berry itself as a marker of spiritual neglect. Lucifer is said to have stamped upon the berries, which caused the growth of those hellacious thorns.

As for me, well, I just like to eat them.

As July melts into August, the hard red of the blackberry begins to darken and sweeten and swell for picking. Thought to have arrived in the States in 1885 from western Europe, the voracious Himalayan blackberry was well established by the 1940s, mostly due, I must say, to the attentive ministrations of the great botanist Luther Burbank. Local gardeners are quick to add: Damn him.

The blackberry native to my area is a spiny-limbed bush with small furry leaves. The sharp-thorned Himalayan is so pervasive that one figures the native to be some kind of odd raspberry or fruiting rose. Quick-nosed animals are so canny that the fruit is rarely seen on the native plants. The Himalayan, however, is everywhere, poking up from lawns, spinning over fences, growing seemingly without water along rural roads.

Picking the wild berry is almost as much of a pleasure as enjoying the fruit later. Standing deep in roadside brambles with an old colander in one purple-stained hand while reaching carefully for the high-hanging fruit with the other purple-stained hand is an informal summer ritual. Once heavy, the colanders are carted home, their contents dumped gently onto spread-out newspaper for the bugs to scamper off.

In my memory, blackberries are inextricably tied to that day when my mother, newly liberated by Germaine Greer, had chosen to go picking without the benefit of underwear. She didn’t need restrictive garments devised by The Man! She could pull on jeans, tie a hasty headscarf, don an old T-shirt, and stride braless and pantyless into the wilds of a nearby bike trail to pick.

Except for the grasshopper. As we stood picking on that hot August day, a large—and I mean, the length of a ball-point pen—grasshopper jumped gaily up my mother’s pants leg, directly on its way up her thigh to you-know-where.

A Panty-Clad Mommy could have shimmied off her trousers on the path and simply trod the beast to death. But a Germaine Greer Mommy could not. What she could do was to run, shouting and thwacking her leg as the creature continued its desperate climb, until she arrived in the safety of her own kitchen and, while my sister and I gaped in horror, snatch down her pants and savage what was left of the insect into the linoleum.

The unfortunate side effects of the early feminist movement dims my affection for the berry not a whit. This time of year, I long for blackberry pie, blackberry jam, and that which Germaine Greer could never have herself named, but my mother ably did: The Princess Breakfast, in which fresh cream is poured gently over fresh blackberries and eaten only, and always, with a silver spoon, the cream soon purpling in the bowl.

But perhaps blackberries are best when sweat streams into the clavicle, the sun roars in its midsummer fullness, a faint powder of dirt floats up from the road and juice stains and thorn snags mark the hands. Eaten by the road, standing in the brambles, when full and plump and hot, blown off for dust and popped directly into the mouth, the waiting colander be damned.

And of course I’m wearing panties.